Gibson Custom revels in the challenges of the guitars brought to life in its Collector’s Choice™ Series, precise recreations of prized existing Les Pauls. Collector’s Choice™ #18 brings to life a rare 1960 Les Paul Standard special ordered in a Dark Burst finish, a guitar that spent its time with one hard-working musician until its eventual sale to its second owner in 2012.
Acquired in Holland in 1961, “Dutchburst’s” world was one of mirror balls, three-piece suits, “Besame Mucho”, “Blue Moon”, and “Autumn Leaves”, in the hands of the Dutch guitarist who used it to ply his trade in a cruise-ship jazz trio. As such, this is not only a very distinctive and characteristic late-1960 Les Paul, but one in impressive condition for a lifelong “working axe”.
With the close cooperation of the guitar’s current owner, Robbert van der Ende, Gibson Custom has measured, scanned and traced every spec, line, and curve of the original ’60 Les Paul to bring you Collector’s Choice™ #18 1960 Les Paul “Dutchburst.”From its tightly figured maple top’s flame and precise dish carve, to its lusciously faded Dark Burst finish, to its characteristically slim late-’60s neck carve, to the two beautifully balanced PAF humbuckers, this recreation takes you straight to the heart of a rare and intriguing vintage Les Paul. Meticulously hand-aged to represent the guitar’s well-played but lovingly cared-for condition today, Collector’s Choice™ #18 1960 Les Paul “Dutchburst” will be available in a Limited Edition of 300 guitars, with the availability of qualifying materials ultimately determining the size of the run.

V3 SLIM TAPER NECK
A PERFECT RECREATION OF THE FAST, SLIM LATE-’60S NECK PROFILE MAKES IT A SWEETHEART TO PLAY.

DARK MATTER
STUNNINGLY ACCURATE FADING OF A RARE ORIGINAL SPECIAL-ORDER DARK BURST FINISH, A FINISH OVER 50 YEARS IN THE MAKING.

HAND-AGED
METICULOUS HAND-AGING MATCHES THE CHARACTER EARNED BY A MUCH-PLAYED BUT WELL-LOVED LES PAUL OVER HALF A CENTURY.
Body 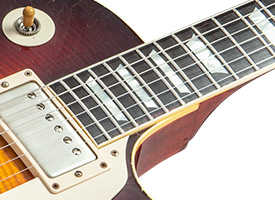 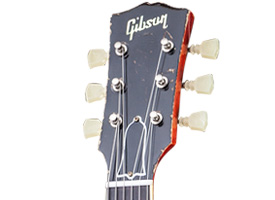 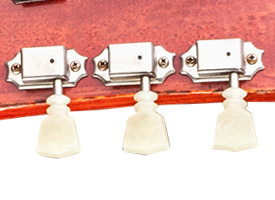 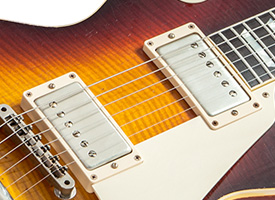 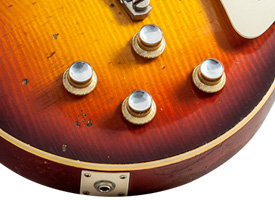